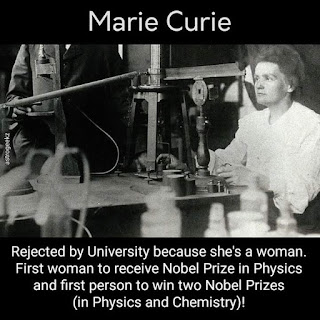 Born Maria Sklodowska on 7 November 1867 in Warsaw, Poland, she was the youngest of five children of poor school teachers.

After her mother died and her father could no longer support her she became a governess, reading and studying in her own time to quench her thirst for knowledge. She never lost this passion.

To become a teacher – the only alternative which would allow her to be independent – was never a possibility because a lack of money prevented her from a formal higher education. However, when her sister offered her lodgings in Paris with a view to going to university, she grasped the opportunity and moved to France in 1891.

She immediately entered Sorbonne University in Paris where she read physics and mathematics – she had naturally discovered a love of the subjects through her insatiable appetite for learning.

It was in Paris, in 1894, that she met Pierre Curie – a scientist working in the city – and who she married a year later. It was also around this time that she adopted the French spelling of her name – Marie. It is of course this version of her name that our charity uses, along with our hospices, Marie Curie Nursing Service and our Marie Curie Helper service.

Work on radioactivity and discoveries

The Curies became research workers at the School of Chemistry and Physics in Paris and there they began their pioneering work into invisible rays given off by uranium – a new phenomenon which had recently been discovered by Professor Henri Becquerel.

He had shown that the rays were able to pass through solid matter, fog and photographic film and caused air to conduct electricity.

Marie also noticed that samples of a mineral called pitchblende, which contains uranium ore, were a great deal more radioactive than the pure element uranium. Further work convinced her the very large readings she was getting could not be caused by uranium alone – there was something else in the pitchblende. Since nobody had ever found it before, it could only be present in tiny quantities, and it seemed to be very radioactive. Marie was convinced she had found a new chemical element – other scientists doubted her results.

Pierre and Marie Curie set about working to search for the unknown element. They ground up samples of pitchblende, dissolved them in acid, and began to separate the different elements present, using the standard analytical chemistry techniques of the time. Eventually, they extracted a black powder 330 times more radioactive than uranium, which they called polonium  . Polonium was a new chemical element, atomic number 84.

When the Curies investigated further, they found that the liquid left behind after they had extracted polonium was still extremely radioactive. They realised that pitchblende contained another new element, far more radioactive than polonium, but present in even smaller quantities.

In 1898, the Curies published strong evidence supporting the existence of the new element – which they called radium   – but they still had no sample of it. Pitchblende is an expensive mineral, because it contains valuable uranium, and Marie needed a lot of it.

She got in touch with a factory in Austria that removed the uranium from pitchblende for industrial use and bought several tonnes of the worthless waste product, which was even more radioactive than the original pitchblende, and was much cheaper. Marie set about processing the pitchblende to extract the tiny quantities of radium. This involved working on a much larger scale than before, with 20 kg batches of the mineral – grinding, dissolving, filtering, precipitating, collecting, redissolving, crystallising and recrystallising.

The work was heavy and physically demanding – and involved dangers the Curies did not appreciate. During this time they began to feel sick and physically exhausted; today we can attribute their ill-health to the early symptoms of radiation sickness. At the time they persevered in ignorance of the risks, often with raw and inflamed hands because they were continually handling highly radioactive material.

In 1902 Marie eventually isolated radium (as radium chloride), determining its atomic weight as 225.93. The journey to the discovery had been long and arduous.

In 1903 Marie and Pierre were awarded the Nobel Prize for Physics jointly with Henri Becquerel for their combined, though separate, work on radioactivity.

In the same year, Marie passed her doctorate thesis in Physics.

In 1906 Marie's life was struck by tragedy when Pierre was killed in a street accident after being knocked down by a horse and cart. Her indomitable spirit, however, kept her working and she went on to succeed him in his Chair as Professor at Sorbonne, as well as carrying on lecturing where he had left off.

Her determination and remarkable endeavours led to a second Nobel Prize in 1911, this time in chemistry for creating a means of measuring radioactivity. Not long after, Sorbonne built the first radium institute with two laboratories; one for study of radioactivity under Marie Curie's direction, and the other for biological research into the treatment of cancer.