It is not my purpose here to provoke an unnecessary hysteria regarding some imported products we might believe are luxury items simply because they are imported or are, thus, regarded as “big man’s” foods and products. However, I feel persuaded to bring to light certain issues that are negatively affecting our lives in Nigeria and other developing countries. My urge to proffer these suggestions does not only stem from what I have read in published data, but from my personal experience and observation, being a citizen and resident of Nigeria and having travelled widely around the world. I have been shocked as I saw how the “Oyinbos” live and contrasted it with how we, in the developing countries are living, and how our lives are being cut short while life in the West is elongating.

In this Part I of this blog article, I will discuss how the brain-drain factor, medical tourisms, and increased consumption and preference for processed foods are decimating our lives in the developing countries while the West prospers in health. In Part II, I will discuss increasing pollution rates, far-fetched structural adjustment programs, public smoking, and corrupt government officials. I will discuss how the duplicity of Westerns countries and the naivete or apathy of the Third World countries are playing out in those conditions and further making us sicker and shortening our lives in Third World.

Brain Drain in the Health Sector

The success of the health sector relies extensively on the availability of specialized health professionals. While the Third World nations like Nigeria typically train many health professionals including medical doctors and specialists such as radiologists, optometrists, cardiologists, neurologists, orthopedic specialists, and cardiothoracic surgeons, few of the specialised practitioners resolve to work in their indigenous countries. Instead, the Western countries poach the experts based on attractive perks. You can imagine my pleasant surprise when I was in the UK and needed to see a specialist and the specialist doctor turned out to be from Nigeria.

Many Nigerian-trained doctors have spearheaded many medical breakthroughs abroad. The UNN-trained Dr. Bennet Ifeakandu Omalu, a forensic pathologist and neuropathologist in the USA, is just one out of many examples. Dr. Omalu was the first person in the world to discover and publish findings of chronic traumatic encephalopathy (CTE) in American football players. He made his discoveries while working at a coroner's office in Pennsylvania. He has published extensively and revolutionalised brain trauma management, not only in the USA, but across the globe.

Vanguard newspaper reported on December 31, 2017 that an estimated 35,000 medical doctors have left Nigeria for the US and the UK out of the 72,000 doctors who are registered with the Medical and Dental Council of Nigeria. This number does not count other essential health professionals like nurses, dentists, clinical psychologists, pharmacists, lab technologists, microbiologists, and so on. Consequently, many citizens in the Third World succumb to varied ailments due to the scarcity of these health professionals who could attend to them. So, the Western nations benefit from the talents of our professionals while we are decimated by even the simplest of ailments and adverse health conditions.

The aforementioned Vanguard report also shows that 42.2% of global medical tourists (i.e., those people that travel abroad for the purpose of medical care) are Nigerians. Many citizens of other Third World countries are also well represented in this multi-billion-dollar situation. Only a few citizens of developed countries leave their home countries to go to other countries for medical care. This high number of citizens of Third World nations embarking on medical tourism bespeaks the poor medical healthcare situation of these countries amidst wealth that is enough to enable those with the financial wherewithal to travel abroad for medical services while the poorer citizens must contend with the barebones systems at home.

While the Western nations cannot be blamed for attracting the citizens of the Third World countries that have access to wealth that is enough to virtually receive their healthcare from abroad, it is worth noting that, according to the Vanguard report, Nigeria’s Minister of Health, Prof. Isaac Adewole, says that “Nigeria spends over $1 billion on medical tourism abroad”, and that the Nigerians travel to not only the US, France or UK, but to other “countries such as India, Malaysia, China, Egypt and Saudi Arabia and more recently; Dubai, with 60 percent of the fund spent in four major areas of cardiology, orthopaedics, renal dialysis issues and cancer.”

Still, some smaller countries are attracting citizens of other Third World countries for medical care. For example, Vanguard also reported that citizens of many big countries like Nigeria “head to smaller countries like Ghana and Benin Republic for their health needs, particularly cancer treatment”. So, then, one can see that when a country develops its healthcare sector, it drains the resources of countries that have not developed theirs since the affluent citizens of the challenged countries will spend their money in the countries that have managed to develop their healthcare sectors. The patronage given to these medical-tourism-receiving countries enables them to further develop their healthcare sectors while the healthcare sectors of the medical-tourism-dispatching countries is further decimated. This situation seems to lay credence to both the Islamic injunction to be judicious in spending and the Biblical caveat, often mentioned by our Christian brothers and sisters, about the need to be diligent and prudent with one’s resources to avoid finding oneself in the awkward situation of the little one has, being taken from one and given to the rich. 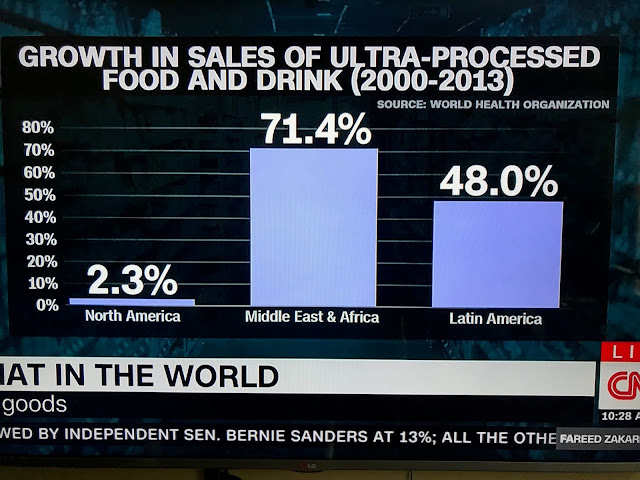 Some common examples of these ultra-processed foods in Nigeria include noodles and canned foods like baked beans, corned beef, sausages and “fruit juice”. As dangerous as they are, noodles have become a staple now, particularly with working mothers because of the ease of preparation. Added to that is a common misconception about “fruit juice” that many Nigerians are drinking. Many people think fruit juices are healthy, particularly the ones that are said to be “natural, with no added sugar or preservatives”. It happens that all fruit juices are processed with varying degrees of preservatives; only that some are worse than others. Only the fresh juice that one makes in the house and finishes immediately could be natural with nothing added.

As I dialogued with some Nigerians living abroad, who are now adopting the healthier eating habits of the West, one of them said;

“We just avoid juice as much as possible mainly because of sugar. Even the No Added Sugar ones are just big Turanci [big grammar]. They are high in sugar or sugar-like substances. In terms of processing, like the data shows, people [living in Western countries] are avoiding all of them as much as possible and the producers are targeting overseas markets more. Again, the ones one can make at home are healthier, but still high in sugar at the end of the day.”

The processed foods are often high in refined carbohydrates which are forms of sugars and starches that do not exist in nature. These ultra-processed foods are notoriously low in nutrients and fiber, which our bodies actually need to stay healthy. So, these bad foodstuffs lack what we need and instead give us substances that make us sick and shorten our lives. What’s more, they require less time and energy to digest making people hungrier and eating more.

It’s disconcerting and disappointing that all these good-tasting and convenient foods are getting a bad rap. It makes me wonder whether we should really eat anything at all since they’re telling us every reason to avoid everything. Even now, some Nigerians living in Western countries have stopped putting salad dressing in their salads. Many of them are forgoing, not only canned meat or fish, but even fresh ones because of cholesterol. To me the prudent thing is to become aware of the dangers of these bad foods and cut down on what I can and educate our children and loved ones accordingly.

In Part II of this blog, I will discuss how the duplicity of Westerns countries and the naiveite or apathy of the Third World countries are also leading to increasing pollution rates, far-fetched structural adjustment programs, public smoking, and corrupt government officials. I will also offer my concluding remarks. Please be sure to subscribe to this blog to be notified of future articles.

The programme took place in Accra, Ghana, from February 11-15, 2019 PREAMBLE I was a participant at the course, which was organized by the African Center for Science and International Security (AFRICSIS) in partnership with the James Martin Center for Nonproliferation Studies (CNS) at the Middlebury Institute of International Studies at Monterey, USA. It is another first time in another African Country. Accra was hot and humid, much like the Lagos, Nigeria weather. The check through passport control was smooth and quick and the luggage didn’t take too long to arrive. There was a hotel shuttle waiting to convey me to the Accra City Hotel. INTRODUCTION The course, intended for a cross-disciplinary audience is more focused on the understanding of nuclear nonproliferation and disarmament and the policy and diplomacy of treaties across and among countries to encourage disengagement of nuclear use in war and encourage the peaceful use of nuclear for humanity. Accordingly, the course
Read more